7 Tips For How to Quit Vaping and Stop Vape Withdrawal There were about seven million vapers in 2011 and this figure shot up to 41 million in 2018. The trend is rapidly gaining ground, and the global e-cigarette market is now said to be worth $19.3 billion.

Until the massive outbreak of lung associated injuries in the United States hit the world, everyone considered e-cigarettes (or vaping) to be safe.

As of October 1st, 2019, 1,080 lung injury cases have been reported by the Centers for Disease Control and Prevention (CDC) and there have been twenty-six confirmed deaths.

In response, one city and three states have enforced a ban on e-cigarettes – San Francisco, Michigan, New York, and Massachusetts. Vaping is clearly not a safe practice, and it’s highly addictive.

Here we’ll explore helpful tips for how to stop vaping for good. 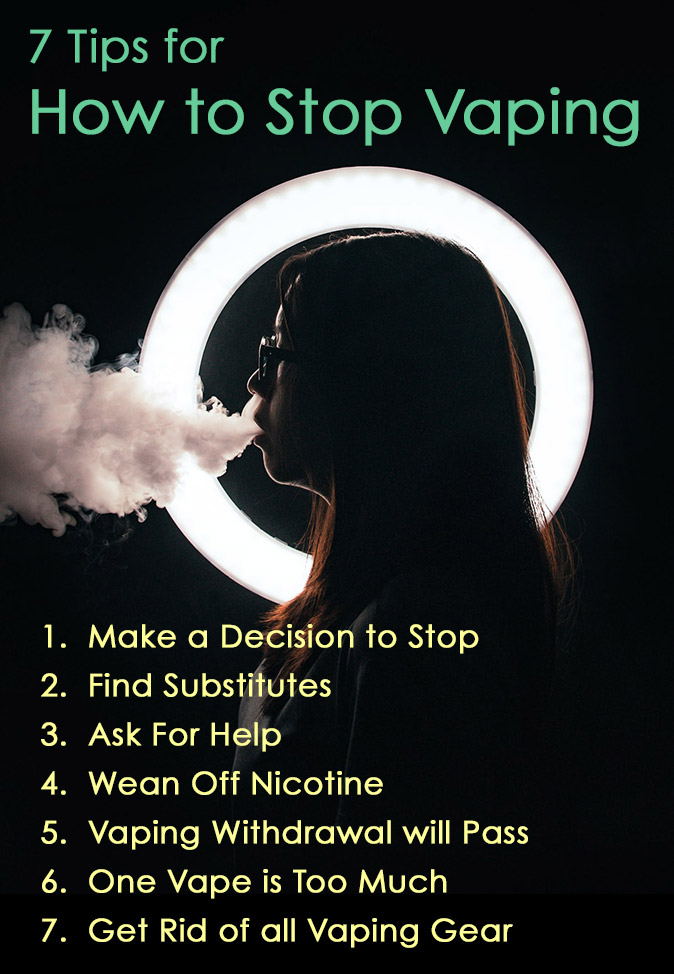 Many people advise setting a date to stop vaping. This plan can work for some, but it can backfire if you’re in control and can make excuses as to why now is not the right time.

The truth is, you can make an impulsive decision to quitting vaping cold turkey or set a date. But either way, you need to have a strong reason to stop. Set the intention to stop now.

Make a firm decision in your mind that you are going to quit e-cigarettes, Juuling or vaping for good. Then stick firmly with your decision.

If you do set a date, make sure to stick with it, and don’t let the date drift off into next week or next month. As the ancient 16th-century proverb states, “No time like the present, a thousand unforeseen circumstances may interrupt you at a future time.”

Vaping is a physical oral habit, and you’ll probably miss the experience of putting the vape in your mouth. For this reason, find substitues to help quit vaping and make sure to stock up on snacks or other things that will keep your hands and mouth occupied.

Try to substitute a food or snack flavor that reminds you of vaping. If you use strawberry flavored juice, find gum or candy that tastes the same, or maybe snack on fresh or dried strawberries. This might help your mind overcome missing out on the vaping ritual.

Keep in mind that people sometimes gain weight after they quit smoking so be sure to limit the amount of sugary or processed foods, at least in the long run.

In the beginning, don’t be too concerned with this, as the goal is to use anything that will provide an adequate substitute for overcoming the oral fixation of vaping. 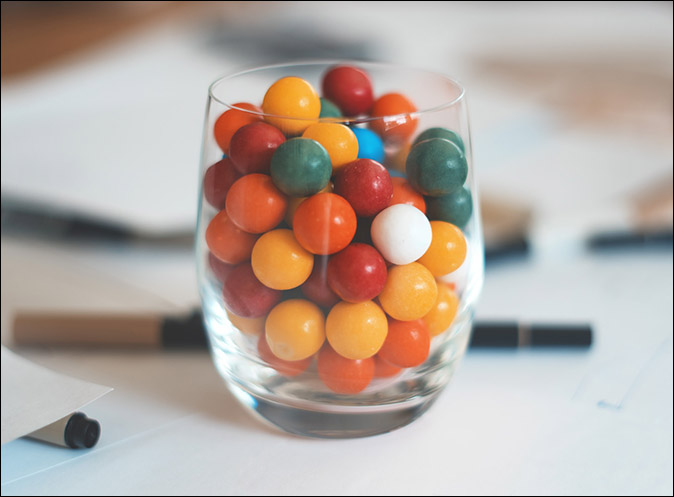 In addition to the physical routine of a having a vape in the hand to fiddle with or putting something in the mouth, there is also the mental aspect to any form of smoking.

Meditation and yoga are good replacements to help overcome the mental side of vaping and they fit perfectly into a healthier lifestyle.

Both meditation and yoga focus on the mind and breathing, and they are also excellent ways to reduce stress. Instead of reaching for a smoke to deal with a stressful situation at home or work, take a minute or two to focus on breathing and being mindful of your breath and surroundings.

When we try to give up an addiction or habit on our own we often relapse. Don’t take it personal and understand that this happens to everyone.

If you’re serious about quitting, it’s important to drop your pride and ask for help. Admit you currently have a problem with vaping, and you really want to rid yourself of the habit.

You could find a friend or family member, or get professional help. The downside of going it alone is that life triggers often take over and we fall back to old habits.

Ask a doctor to suggest a nicotine substitute, and make sure to let friends and family members know you are trying to quit so they can offer support and not smoke around you if possible.

Get some form of accountability so that you can have a support mechanism to help you as you overcome your addiction.

Tip 4 – How to Stop Vaping by Weaning Off Nicotine

For some people, quitting cold turkey is the most effective option. But for many others, the best way to stop vaping is by weaning off of nicotine first.

Vaping is partly habitual – the act of holding something in the hand and putting it in the mouth. Vapes also contain nicotine and it is one of the most addictive substances available.

Vape juice comes in varying nicotine strengths, and by gradually reducing the amount of nicotine intake, it’s possible to wean off the addiction to it.

Instead of the usual 24 mg of juice, begin by cutting back to juice that contains 18 mg of nicotine concentrate for a week. At week two, cut it back to 6 mg of nicotine.

For week three, switch to 0 mg juice that is nicotine-free, and stay at that level for another week. This will help reduce the cravings for nicotine, but it still won’t help with the habit of vaping.

At this point, cut back on the number of times you vape each day. Try to get down to one or two times a day for a week. The following week, only smoke once a day.

After that, try alternating one day smoking and one day not smoking. Eventually, it will get much easier until you can stop vaping altogether.

It might take a long time to wean off, but some day it will be possible to join the ranks of the non-vapers and be completely free oof smoking.

The same method used for weaning off nicotine can also be used for those who want to quit smoking marijuana.

Tip 5 – Vaping Withdrawal – This Too Shall Pass

Vaping withdrawal is very real, and the physical withdrawal symptoms from nicotine will be fleeting and most likely most intense on the first few days after the last puff.

Vape withdrawal isn’t as painful as giving up hard drugs, but nicotine is very powerful and there may be some growing pains, so recognize them as such.

There isn’t much that can be done to treat withdrawal, although nicotine replacement therapy can be helpful to stop or reduce the symptoms. This type of therapy uses small amounts of nicotine in gum, tablets or patches.

Welcome the change, with the understanding that each bout of cravings will pass. Do something in the moment to distract yourself from the craving.

You could go for a walk, have a cup of tea, make a smoothie or call a friend. When facing cravings, remember the old adage, “this too shall pass.”

Understand that the most intense feelings of withdrawal and cravings will often diminish after the first week, and the addiction will begin to subside. Nicotine withdrawal usually lasts about one month, and will get much easier after that time.

Find healthier activities to replace vaping. As a non-smoker, you’ll be making better choices for the future.

Temporary pleasures can often lead to pain later on and every time you think about vaping, switch your thoughts to how grateful you are that you are no longer a vaper. 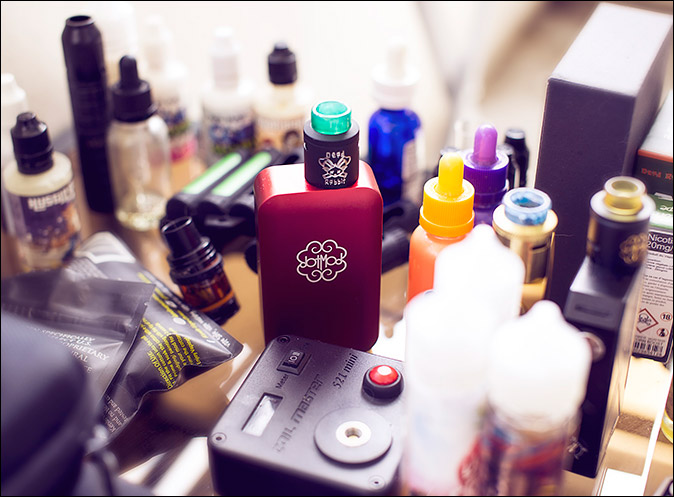 Once you quit – if you find your mind playing tricks on you (like it often can), saying things like “I’ll just have one” and then adding a reason – understand this is a trap.

If you have just one hit of a vape you’ll need to start detoxing from the beginning. After you have managed one week, it’ll be so much easier. At any point, “just one vape” on a night out, or to deal with something stressful will simply start the cycle of being hooked again.

This ties in with Tip 2 – Find Healthy Substitutes. When you find yourself tempted to have just one, do something else or simply tell your mind that you’re a non-smoker now.

Having anything related to vaping around only tempts fate. Make sure to cleanse your home, car, work, and all personal effects of anything to do with cigarettes or vapes.

Immediately after making the decision to quit vaping, get rid of all electronic e-cigarettes, vaporizers, vape juice refill cartridges, and anything else that might make you think about it.

You are a non-smoker now and you don’t need anything related to vaping, so be clear on your decision and get rid of all vape gear.

Living a vape-free/smoke-free life gives you a newly found freedom. But don’t confuse freedom and compulsion, they are two different things. Remember you made the wise choice to stop vaping, so take a moment to congratulate yourself every time you think about it.

PrevPreviousLexapro and Weed – Can I Mix Marijuana and Antidepressants?
NextHow Long Does Alcohol Withdrawal Last?Next