March is Self-Injury Awareness Month [Self Harm or Cutting]

Numbness, emotional distress and overwhelm can lead people to self harm. For some, self-injury wakes them up, and for others, it provides a sense of relief from deep frustration. It is a bigger issue than many people realize, which is why March is recognized as Self-Injury Awareness Month.

Self-harm or self-injury occurs when a person intentionally inflicts damage on their own body by scratching, burning, skin picking, or cutting themself.

Cutting is the most common form of self-harm, however, if a person hurts themself on purpose, then they’re self-harming. Sadly self-injury is on the rise across the world and is most prevalent in girls ages 15 to 24.

According to the American Psychological Association (APA), self-harm, in and of itself, isn’t an actual mental health disorder and is clinically referred to as non-suicidal self-injury (NSSI).

Even so, there are often underlying mental illness problems and there’s also a clear link between harming oneself and suicide. Removing the stigma surrounding self-harm, by offering support and care is imperative if we are to reverse this trend.

Learning the signs of this condition, as well as understanding the motivation behind it can help people open up.

Feeling misunderstood is one of the reasons people hide self-harm. That’s why March 1 is Self-Injury Awareness Day, an important day to bring attention to the subject. This is followed by an entire month of education and awareness around self-injury. Self Injury is Often Concealed

Despite figures exposing that 17% of people will self-harm in their lifetime – it’s a subject that is often hidden, meaning this statistic will most likely be severely understated.

People might wear a shirt while swimming, bracelets to cover their scars or hide cuts with a plaster cast. Many feel they may lose their job or get into trouble at work or school if their scars are exposed. They’ll often make up a story of where the bruise or scar came from.

Concealing the problem simply makes it worse. That’s why awareness of self-harm is important, so that people can get the much-needed help they require, without lectures, shaming or blame.

Self-Injury Awareness Month is an important time to shine the light on a problem that is so often covered over.

Self-harm is the second leading cause of death among youth ages 10 to 24 years of age. Each year there has been an 18.8% increase in girls ages 10 to 14 years cutting themselves.

In fact, cutting and depression have tripled for girls and a British study showed a 68% increase in self-harm in girls ages 13 to 16.

By sharing information and awareness about the devastating upward trend of self-harm, we can help save lives. If people want to stop cutting themselves, they can learn alternative coping mechanisms.

The first step in getting help is to tell someone. However, the taboo surrounding self-harm often means that people don’t even get as far as the first step. Breaking the Taboo of Self Injury

Troubling findings published by YoungMinds and the Cello Group expose the fact that most people are clueless when it comes to self-harm. This makes it even harder for young people to step forward and ask for help.

Three out of four young people simply don’t know where to turn for help and parents don’t always seek professional help for their child’s self-harming habits. A sad fact is that half of the general practitioners surveyed didn’t understand the condition.

It’s little wonder that people don’t know where to turn because many doctors, parents and teachers don’t seem to know enough about self-injury to help.

This leaves kids in a dangerous situation. More education and awareness is required to remove the stigma and allow those who are vulnerable to speak up about self-injury.

Recognizing Self Harm in All Its Forms

Self-harm or non-suicidal self-injury (NSSI) is officially defined as “causing intentional damage to tissue on your body,” and as such, it comes in many forms. That being said, there are many ways that we injure ourselves, sometimes unconsciously, that all need to be addressed.

11 Forms of Physical Self Injury

Cutting is the most common form of physical self-injury, with 45% of individuals choosing this method.

Here are 11 of the Most Common Forms of Physical Self-injury: 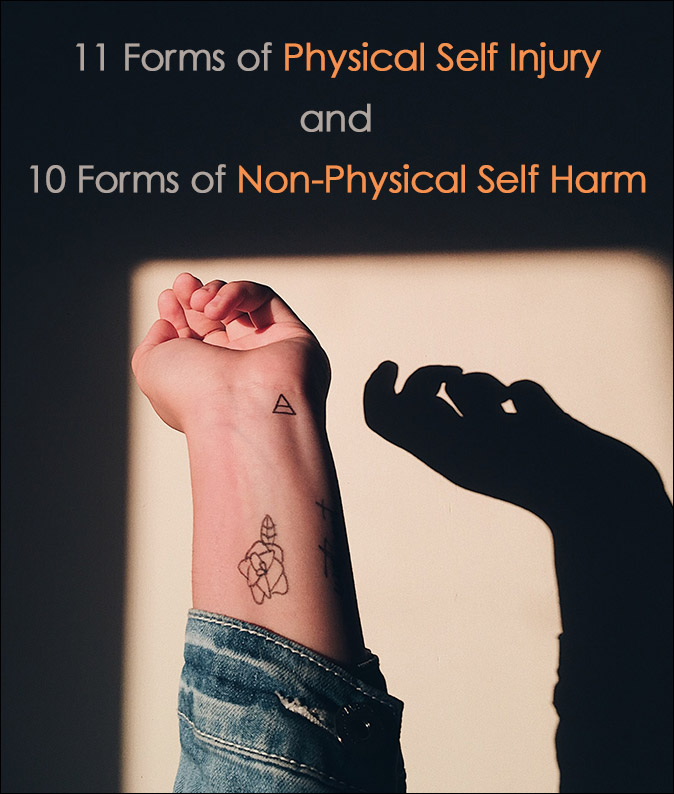 10 Forms of Non-Physical Self Harm

There are also non-physical manifestations of self-harm that are often overlooked and many of these are connected to another mental health condition.

These are 10 of the Most Common Forms of Non-physical Self-harm:

5 Risk Factors for Self Injury

Like most things, this condition often starts small. Whether or not a person turns to self-harm as a coping mechanism depends on several factors such as:

Mental health disorders often co-occur with addiction, and self-injury is no exception. Self-injury is many times associated with anxiety, depression, substance use, and eating disorders.

Here are some co-occurring mental health disorders, in order of most commonly coexisting with self-injury:

Understanding self-injury in its many forms, and raising awareness can help remove the stigma for those who intentionally harm themselves. It also allows people to feel less isolated and more willing to seek help.

Help spread the word about Self-Injury Awareness Month this March by sharing this information with those you know and care for so they can understand there’s no shame in seeking help.