What is Wet Brain? Symptoms, Treatment and Recovery 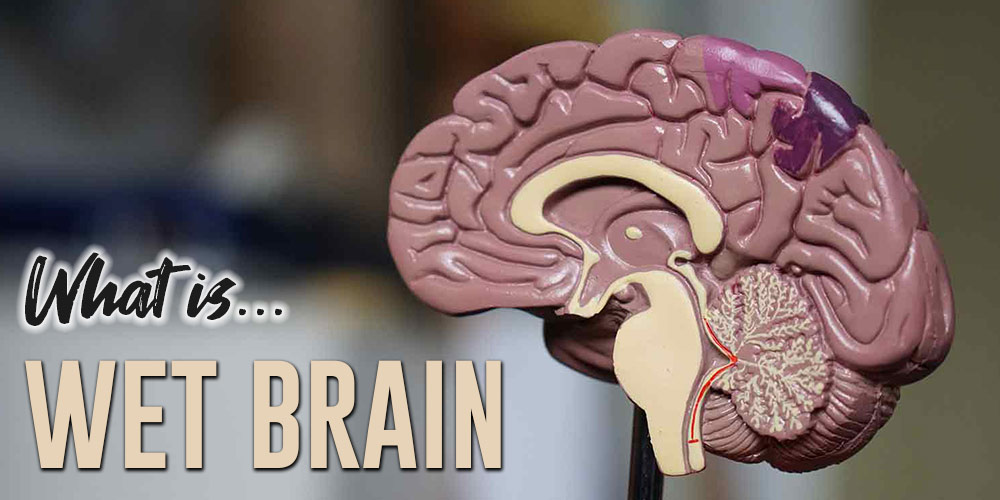 Wet Brain also known as Wernicke-Korsakoff Syndrome (WKS) is a severe condition that occurs due to nutrient deficiencies from long-term alcohol misuse or alcoholism.

Millions of Americans misuse alcohol. According to the National Institute on Alcohol Abuse and Alcoholism (NIAAA) approximately 9.8 million men and 5.3 million women suffer from alcohol use disorder.

Here we’ll explore the two forms of Wet Brain Syndrome, how it progresses, whether or not it’s possible to reverse the symptoms, and how to avoid Wernicke-Korsakoff Syndrome.

What is Wet Brain Syndrome?

Wet Brain Syndrome is a type of brain damage due to excessive alcohol consumption. The reason for the disease is a thiamine (Vitamin B1) deficiency.

Drinking alcohol to excess damages the liver, and in turn, the body cannot absorb enough thiamine, which is consumed from the diet and stored in the liver. Many essential neurotransmitters in the brain require thiamine to function correctly.

Autopsies have uncovered that a massive 13% of alcoholics have symptoms of Wernicke’s encephalopathy, Including lesions on the brain, but sadly 20% of these patients were not diagnosed with Wernicke-Korsakoff Syndrome prior to their death. How Does Alcohol Contribute to Malnutrition?

You’ve heard it before, drinking alcohol results in “empty calories,” because there are no proteins, nutrients or vitamins in alcohol. In fact, alcohol inhibits the absorption of zinc, folic acid, vitamin B1 (Thiamin) and vitamin B12.

Alcohol is a diuretic, and as such encourages the washing out of water-soluble minerals like zinc, magnesium, and potassium. The severity of alcoholic malnutrition differs between social groups.

Alcohol can also encourage intestinal permeability (leaky gut) which means that nutrients can leak into the blood, rather than being absorbed in the intestine.

Thiamine is a vitamin, also known as Vitamin B1. The human body cannot produce thiamine so it must consume it from food in the diet. According to the NIAAA, humans require 0.33 milligrams (mg) thiamine for every 1,000 kilocalories (kcal) of energy they consume. Currently 1.1 mg thiamine is recommended for women and 1.2 mg for adult men.

Thiamine is predominant in the skeletal muscles and in the heart, liver, kidney, and brain. Thiamine is also required for several biochemical reactions in the body including the synthesis of neurotransmitters.

The nervous system and the heart are sensitive to low thiamine levels. In the brain, thiamine is required by nerve cells, for enzymatic reactions, and glial cells. Other than Wernicke-Korsakoff Syndrome, thiamine deficiency is linked to other alcohol-induced brain injuries, including alcoholic dementia.

In affluent countries like the United States, thiamine deficiency is clearly linked to alcoholism, with up to 80% of those misusing alcohol also being deficient in thiamine. Vitamin B1 Thiamine Rich Foods Include:

Wernicke-Korsakoff syndrome can be categorized into two separate conditions:

Wernicke’s Encephalopathy (WE), sometimes referred to as alcoholic encephalopathy, is a short-lived and severe illness that causes neurological symptoms due to biochemical lesions in the nervous system.

The most common areas of the brain to be affected are the thalamus and hypothalamus, which are responsible for memory.

What is Korsakoff’s Psychosis? 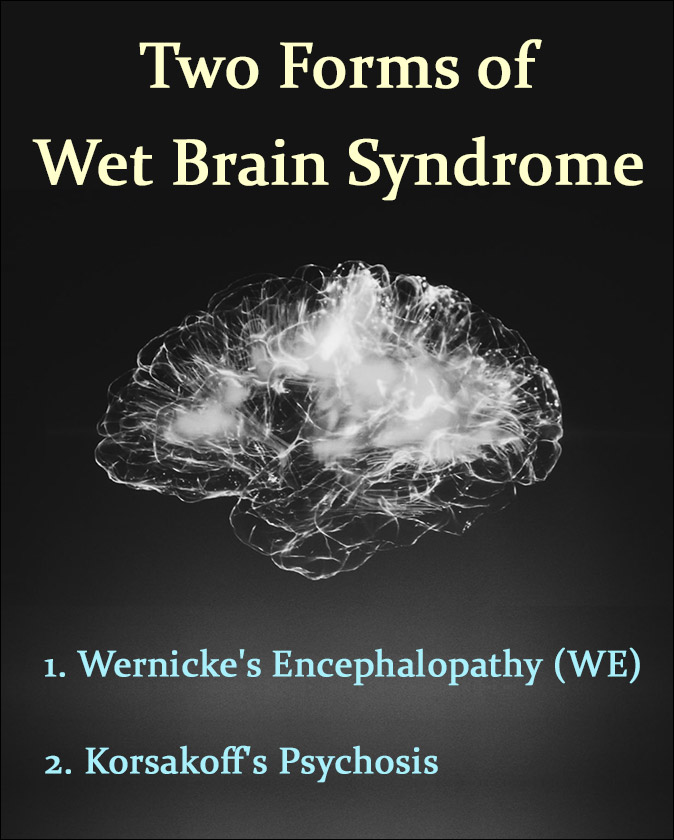 What are Wet Brain Symptoms From Alcoholism?

As discussed there are two forms of Wet Brain Syndrome – “Wernicke’s Encephalopathy” and “Korsakoff’s Psychosis.” Wet brain symptoms that a person suffers from will depend on what syndrome they have.

According to the National Organization for Rare Disorders (NORD) 80 to 90% of people with Wernicke Encephalopathy (WE) syndrome develop Korsakoff psychosis.

Korsakoff’s Psychosis symptoms appears as severe damage to memory and usually include:

How Common is Wet Brain Syndrome?

It’s hard to put a figure on the number of people who currently suffer from wet brain or Wernicke-Korsakoff Syndrome. As discussed, the illness is often not diagnosed until after death. According to the National Organization for Rare Disorders (NORD) WKS affects more males than females and occurs in 1% to 2% of the population.

Related: Effects of Alcohol on the Body and the Brain

Is it Possible to Reverse or Cure Wet Brain Syndrome?

Significant recovery can be made from wet brain symptoms if caught early. Treatment for wet brain typical includes:

Intravenous thiamine is required for people who have impaired gut function.

For some, taking a strong oral thiamine supplement to boost thiamine levels is enough to sufficiently increase thiamine levels to notice some healing. In other cases, where the brain damage is severe, memory and gait may remain permanently impaired.

Wernicke-Korsakoff Syndrome, or wet brain, can create permanent damage to the brain, cause patients to lapse into a coma, or even death. A person with WKS will find it hard to interact socially and have issues walking, which can lead to other injuries.

Although WKS can be reversed if caught early, the majority will progress to Korsakoff’s Psychosis. Only 10% to 20% of people with Wernicke’s Encephalopathy will be able to turn things around.

Considering the devasting effects of wet brain, it’s never too early to stop drinking and get help for alcohol addiction. Many people wish they had reached out and asked for help sooner.

When people get help as shortly after they realize they might have a problem with alcohol, terrible disorders like Wet Brain Syndrome can be avoided or reversed.

PrevPrevious25 Movies About Depression
NextHigh Functioning Anxiety – What is it, Symptoms and TreatmentNext