Effects of Alcohol on the Body and the Brain

Alcohol consumption is deeply engrained in our culture. Whether it’s a glass (or two) of wine in the evening or a few bottles of beer after work—it’s seemingly the norm.

According to the 2018 National Survey on Drug Use and Health (NSDUH) by SAMHSA, over 86.3% of American adults reported having indulged in alcohol consumption at one time in their lifetime. Another 26.45% engaged in binge drinking within the past month. 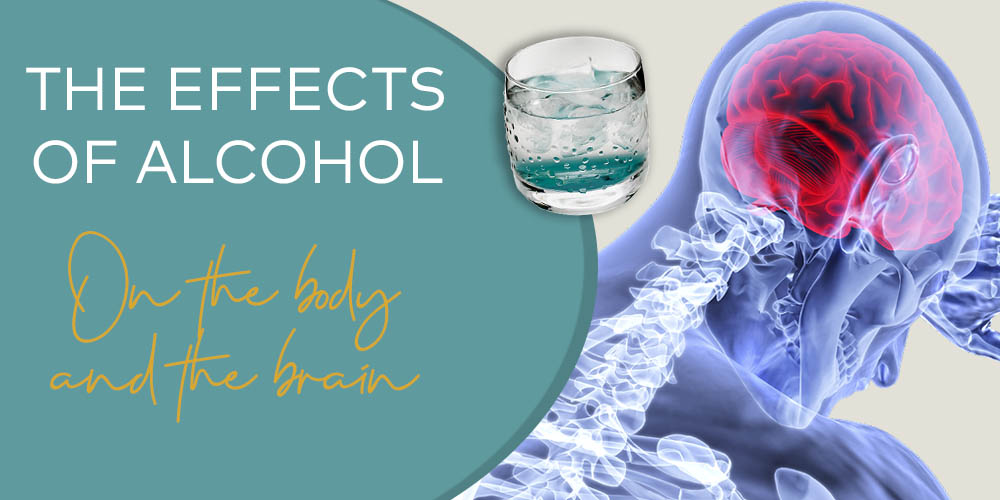 These statistics point to a high prevalence of alcohol use in the country. This is despite the widespread awareness of the health consequences of drinking. Prolonged or excessive use of alcohol has been shown to cause dependence (Alcohol Use Disorder) and long-term damage to several body organs, not to mention the risk of overdose.

Figures from the 2018 NSDUH show that more than 14 million adults in the U.S. suffer from an Alcohol Use Disorder (AUD). Unfortunately, only 7.9%  of those diagnosed with AUD sought treatment.

Even more concerning, around 88,000 people lose their lives annually from alcohol-related deaths—making it the 3rdleading cause of preventable death.

Drawing on the prevalence and risk of alcohol, it’s important to understand what exactly goes on in our bodies when we drink. Read on for more on the effects of alcohol not the body and brain.

Understanding the Short-Term and Long-Term Effects of Alcohol

The term “alcohol” largely refers to ethanol—which is the psychoactive ingredient that gets you intoxicated.  Essentially, ethanol is a toxin that can have powerful effects on your mental state and mood.

For this reason, it’s metabolized in the liver—whose function is to neutralize and eliminate toxic substances in the body.

However, the liver is limited in its capacity to process alcohol in your system (i.e., it metabolizes one standard drink every hour). A standard alcoholic drink is defined as 12 ounces of beer with 5% ABV or 5 ounces of wine with 12% ABV.

Drinking past the liver’s processing capacity leads to an accumulation of alcohol in the blood and body tissue. The higher the Blood Alcohol Concentration (BAC), the more severe the side effects.

Keep in mind that the extent to which alcohol affects the body and brain depends on several factors such as family history, frequency and quantity of alcohol consumed, age, gender, and overall health.

Some short-term effect of alcohol on the mind and body include:

Heavy drinking or prolonged alcohol use can lead to long-term effects/complications that surface gradually.

Long-term side effects of alcohol include: In the case of binge drinking, users are at an increased risk of alcohol poisoning, which is characterized by the following signs:

What Does Alcohol Do to the Brain?

When a person consumes alcohol, it is absorbed into the bloodstream through the stomach and small intestines. It then travels to various body organs, including the liver, where it is metabolized. But if the liver is overwhelmed, the excess alcohol travels back to the body.

Subsequently, alcohol moves to the central nervous system where it crosses the blood-brain barrier. Here it directly interacts with the billions of interconnected neurons in the brain. Because it is a depressant, alcohol inhibits the signals sent between the neurons and also impairs certain automated processes such as information processing and balance.

Other effects include impacting GABA neurotransmitters, affecting reaction time, and causing lethargic movements and slurred speech. Alcohol also causes the release of dopamine, which is associated with the warm, fuzzy feeling most users seek.

While some effects of alcohol on the brain are short-term and they wear off quickly, others persist leading to impaired brain function and the deterioration of a person’s mental health.

Here are some examples of what alcohol does to the brain:

A study published in the Archive of Neurology suggests that excessive consumption of alcohol over a prolonged period shrinks the size of the brain.

The findings of the study showed that people who consumed 2 drinks every day for 20 years had smaller brains than those who didn’t indulge in alcohol.

Some people drink a little too much on a night out and can barely recall the last few hours. We know that binge drinking may lead to memory loss. But a study in the Journal of Neurology shows that prolonged use of alcohol speeds up cognitive decline by up to 6 years.

It’s a form of dementia mainly caused by an alcohol use disorder. Wernicke-Korsakoff stems from a deficiency of thiamine (Vitamin B1). Most alcoholics tend to have a thiamine deficiency due to poor diet and alcohol’s ability to inhibit its effective absorption.

Symptoms of “wet brain” can include:

Studies show that alcohol dependence is a huge risk factor for diseases and one of the leading causes of disability in the US. Prolonged use of alcohol causes chemical changes in the brain.

Alcohol interacts with a group of receptors known as GABA (gamma-Aminobutyric acid), which help regulate the release of endorphins (also known as the “feel-good” chemical).

This creates a feeling of euphoria and an increased desire for more alcohol to maintain the feeling. Over time, alcohol stops producing the same effects as the brain builds tolerance.

According to a study published in Addiction, there’s a close and complex association between depression and alcohol intake. Several scientific sources point to a causal relationship between the two, with each exuberating the symptoms of the other.

Whereas some people may turn to alcohol as a way of self-medication to find temporary relief for their depressive symptoms, alcohol may also increase the risk of falling into depression.

This is known as a co-occurring disorder and it requires integrated dual diagnosis treatment to address both the depression and alcohol addiction at the same time.

According to an article appearing in Pediatric Respiratory Reviews, alcohol abuse is the main preventable cause of birth defects in America.

Alcohol has been shown to travel across the placenta to the fetus. This significantly increases the risk of Fetal Alcohol Syndrome, which is characterized by the following symptoms:

Pregnant or breastfeeding women are strongly advised against drinking alcohol! There’s no safe level of alcohol consumption during these stages—due to the risk of damaging the baby’s brain.

How Does Alcohol Affect Your Body?

The effects of alcohol in the body start from the moment you take first shot or sip. It’s absorbed into the bloodstream before diffusing into different tissues in your body. Here’s how alcohol affects specific body organs:

As the first line of defense against the toxicity of alcohol, the liver often suffers significant damage from your alcohol habits. Long-term alcohol abuse increases the risk of liver disease and inflammation.

Inflammation causes cirrhosis, which is an irreversible scarring of tissue. The scar tissue gradually damages the liver function, hindering its ability to eliminate toxins from your body. Similarly, liver diseases leads to a build-up of waste and toxins in your body since your liver’s function is severely hindered.

Contrary to widespread assumption, alcohol is not an aphrodisiac—it’s quite the opposite. While it may reduce your impulse control and lower social inhibition, Alcohol has been shown to reduce sexual performance.

In a study appearing in the Indian Journal of Psychiatry, the findings showed that 72% of subjects diagnosed with alcohol dependence “had one or more sexual dysfunction, the most common being premature ejaculation, low sexual desire and erectile dysfunction.” They concluded that the amount of alcohol consumed was the “most significant predictor of developing sexual dysfunction.”

In women, alcohol increases the risk of ovulation and menstruation disorders—including irregular or heavy periods. It also puts unborn babies at increased risk of developmental disorders such as Fetal alcohol syndrome disorders (FASD).

Did you know that each gram of alcohol packs as much as 7 calories—making it the second most calorie-rich nutrient?

However, the effects of alcohol on weight are varied. For some people, especially wine drinkers, alcohol may cause weight loss.

For others such as beer drinkers, it can lead to weight gain or a beer belly.

Additionally, a study published in the Journal of Obesity Research suggested that drinking habits may play a role in weight changes. According to the findings, there was no noticeable association between light-moderate drinking and weight gain—whereas heavier drinking leads to increased weight.

Heart disease is a broad category of cardiovascular diseases. It’s the leading cause of death in the world—accounting for more than 15 million death worldwide and approximately 647,457 deaths in the U.S.

Heavy drinkers have a higher risk of heart complication such as:

Around 8% of the global population suffers from Type 2 diabetes. The condition is characterized by a reduced uptake of glucose (blood sugar)—leading to high levels of sugar in the blood.

Alcohol can worsen complications due to diabetes in several ways. For one, it can hinder the function of the liver—which stores glycogen (a form of glucose). Alcohol can also cause hypoglycemia (low blood sugar) or interact with diabetes medication.

The negative effects of alcohol on the digestive system are often felt after the damage has been done. Aside from short term side effects such as vomiting and nausea, alcohol can also cause severe damage to your gastrointestinal system. Some effects include:

According to a study in BMC Public Health, 10% of all tuberculosis cases in the world are linked to alcohol consumption.

When you consume alcohol, your body immediately prioritizes its metabolization and elimination from the body. This takes up valuable resources—making it harder for the body to tend to other more important functions such as fighting pathogens.

Alcohol has also been shown to interfere with the diversity of microbes in the gut. These are microorganisms that are important for healthy immune function.

The U.S. National Institute on Alcohol Abuse and Alcoholism (NIAAA), notes that “chronic heavy alcohol consumption, particularly during adolescence and young adulthood, can dramatically affect bone health and may increase the risk of developing osteoporosis (porous bones) later.” This increases a person’s susceptibility to fractures.

Understanding how alcohol affects the brain and the body is just the beginning. The negative effects of alcohol extent beyond the user. It also affects relationships with friends and family, leads to financial issues, legal trouble, and poor academic performance.

However, all is not lost, and it’s never too late to take back your life from alcoholism.

Recovery starts with acknowledging that you have a problem and making the decision to overcome the challenge. From there, you can seek professional help from specialized addiction treatment centers such as Oro House.

During your journey to recovery, you’ll learn all the evidence-based and holistic tools to handle triggers and maintain sobriety.