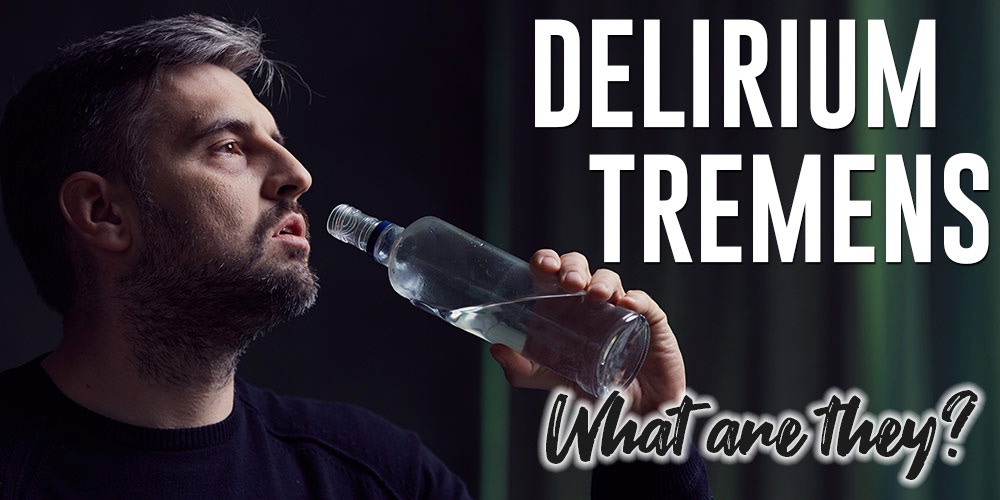 The body of a long-term heavy drinker becomes accustomed to the use of alcohol so it’s important to understand that suddenly stopping drinking can cause Alcohol Withdrawal Delirium (AWD) or Delirium Tremens (DTs).

This is a serious condition that can cause confusion, alcoholic shaking (aka The Shakes), sweating, high temperature and in the worst cases – seizures or death can result.

Withdrawing from the effects of alcohol causes the central nervous system (CNS) to go into a state of panic. Alcohol suppresses the CNS by inhibiting excitatory neurotransmitters and promoting GABA, which is an amino acid that relaxes the brain, temporarily reducing anxiety. DTs are often common after three days of sobriety.

DTs, formerly known as brain-fever, have been observed since the 1700s but the name “delirium tremens” was officially coined by English physician Thomas Sutton, in 1813. DTs are defined as a severe alcohol withdrawal syndrome that occurs in people who have developed a physical dependence to alcohol.

Delirium Tremens : How Much Beer and Alcohol Does It Take?

In one study, 10 former morphine addicts were split into two groups.

More significant delirium tremens symptoms were observed in the heavier drinkers. Interestingly one of the participants didn’t abstain, and instead, he reduced his intake by 50%. Even this reduction in intake resulted in symptoms of alcohol withdrawal. Risk factors for developing DTs vary from person to person.

According to the National Institute of Mental Health, the following five factors make a person more likely to experience DTs:

Alcohol withdrawal has been treated in a variety of ways over the years. In 1902 paraldehyde (a seizure medication) was commonly prescribed.

In the 1910s, lumbar puncture was the treatment, followed by hydrotherapy in the 1930s and electroconvulsive shock therapy and insulin coma in the 1940s.

From the 1950s onward, pharmaceutical drugs have been commonly used in the treatment of delirium tremens. Fast forward to the 21st Century and benzodiazepines are the most common medicines prescribed for severe alcohol withdrawal.

The first part of treatment for alcohol addiction is an alcohol detox program to safely overcome any symptoms experienced during the withdrawal phase.

Treatment of alcohol detox is normally carried out in three stages – critical or immediate treatment of withdrawal symptoms, therapy to reduce complications, and finally long-term therapy to encourage sober living.

Approximately 5% of DT sufferers may die and as such medical treatment and supervision is necessary.

Mild to severe symptoms of withdrawal can characterize whether a person is suffering from DTs.

There are also tests that can be carried out to pinpoint DTs as the cause of disease.

Alterations in blood chemistry, elevated liver enzymes, and nervous system disturbances can be measured by clinicians treating patients with severe withdrawal symptoms to rule out other causes of delirium.

Mild Symptoms of Withdrawal From Alcohol

Knowing that the symptoms of withdrawal during alcohol detox can be mild to severe is just as important as understanding how long does alcohol withdrawal last. Mild symptoms usually occur within 6 to 8 hours after the last drink.

The following are considered mild symptoms and could be risk factors for developing DTs: Symptoms during withdrawal can build and subsequent seizures or hallucinations can be more severe. DTs are severe and must be monitored as they can cause illness and death if not treated effectively. Severe symptoms often begin within 12 hours, but sometimes up to 24 hours later.

Severe Symptoms of DTs include:

When Will DTs Alcohol Occur?

There is no firm timeframe for the onset of severe delirium tremens symptoms. It can happen as quickly as 5 hours from the last drink to 10 days after cessation from alcohol.

However, it is normal for a person to suffer DTs any time during 1 to 3 days after they stop drinking alcohol.

DTs are common in people who have been drinking heavily for years. The symptoms are distressing and can impair (or halt) performance at work and in social areas of life. Other complications that can occur due to DTs are Wernicke’s encephalopathy and Korsakoff’s psychosis.

Protecting the brain and central nervous system when a person is coming off alcohol is key to a full recovery. This is usually done through the use of IV fluids, beta-blockers, and supplementation.

The most important supplement for a recovering heavy drinker is thiamine (vitamin B) as Wernicke’s encephalopathy is caused by a thiamine deficiency and might be reversible if caught early.

How to Prevent Delirium Tremens

The reality is, low-risk drinking or complete abstinence is the best way to prevent alcoholic delirium tremens. As the saying goes – prevention is the best cure.

But what if you are already a heavy drinker?

Many people who notice they have increasing issues with their health due to excessive or long-term alcohol consumption should seek the help of doctor at the first signs of a problem. A doctor will usually recommend an alcohol addiction treatment program to begin recovery.

Addiction specialists at a treatment facility understand that alcohol addiction is a serious disease that comes with many different types of complications, especially during detox.

Because DTs can be fatal, it’s crucial that detox is medically supervised to ensure symptoms are properly treated and monitored to reduce or eliminate more significant health issues.