In this article we’re going to discuss some of the worst drugs and some of the most dangerous drugs but first did you know that Americans are more likely to die from drug abuse and misuse than any other preventable health risk?

According to data provided by the National Institute on Drug Abuse (NIDA), deaths related to substance abuse have tripled since the turn of the century—with 1 in every 4 lives lost attributed to illicit and prescription drugs.

The mortality and morbidity risk of substance abuse is clear—but what is the worst drug? Well, the answer to this question is rather complicated – i.e., it depends on how you quantify the risk posed by drugs and what specifically makes one more dangerous than another.

Read on for a well-curated list of some of the most dangerous drugs, why they’re dangerous, and available treatment options.

Disclaimer: All drugs—whether it’s hard street drugs like cocaine or common painkillers in your medicine cabinet—have the potential to be dangerous if they’re abused, misused, or combined inappropriately. You should not assume a drug is not dangerous by virtue of not appearing in this list. 10 of the Worst Drugs and Most Dangerous Drugs

From infamous street drugs to prescription medication in your neighborhood pharmacy, the list below takes a look at a diverse list of substances. Although the list is not arranged in any particular order, it highlights the most dangerous drugs in terms of their negative physical, emotion, mental, and social impact. Alcohol is easily one of the worst drugs, yet it slips under the radar owing to the normalization of its consumption. The 2018 National Survey on Drug Use and Health (NSDUH) estimates that roughly 9 in every 10 American adults (above age 18) have indulged in alcohol consumption at one point in their lives.

According to a UK study published in The Lancet, alcohol is the most harmful drug—ranking higher than the likes of crack cocaine and heroin. This assertion is based on the harm alcohol causes to the drinker, those around him/her, and society in general.

The National Institute on Alcohol Abuse and Alcoholism (NIAAA) notes that around 88,000 people in the U.S. die from alcohol-related causes—making it the 3rd leading cause of preventable deaths.

It’s also responsible for most driving fatalities, costs the U.S. economy around $250 billion, and it leads to family consequences (10% of children live with a parent who’s dependent on alcohol). To quote the Centers for Disease Control and Prevention (CDC), “Tobacco use is the leading cause of preventable disease, disability, and death in the United States.” It’s smoked by around 40 million American adults, kills nearly 500,000 people annually, slashes the life expectancy of smokers by a whopping 10 years, costs the economy $170 billion in health care, and leads to serious illness in 16 million people.

The figures above are self-explanatory and they highlight why tobacco is the worst drug. Despite its legal status, tobacco is a highly addictive substance that’s responsible for a host of serious health problems to both smokers and secondhand smokers—including lung cancer, chronic obstructive pulmonary disease (COPD), coronary heart disease, stroke. Meth is classified as a synthetic stimulant that is typically taken orally, snorted, injected, or smoked. It’s sought-after after for its euphoric effects of heightened alertness and energy.

In terms of the number of users who require medical attention after drug use, meth ranks highest as the worst drug. This is according to findings from the 2017 Global Drug Survey—with 6.1% of Americans who abuse the illicit drug seeking emergency treatment, compared to a global average of 4.8%.

And With news headlines such as “A New Drug Scourge: Deaths Involving Meth Are Rising Fast” and “ Meth, the Forgotten Killer, Is Back. And It’s Everywhere” circulating in the media, it’s easy to see why meth is a source of concern—and why it ranks as one of the most dangerous drugs. A report by the CDC shows that the number of meth-related deaths have increased 3 fold between 2011 and 2016.

Fentanyl—an opioid agonist like morphine—was originally intended to help treat patients by altering how the body perceives and responds to pain. Owing to its potency (up to 10X more than morphine), Fentanyl is sometimes prescribed for patients with chronic pain when other alternatives fail. But this also means that it’s a sought-after recreational drug.

The CDC notes that fentanyl is in part responsible for the ongoing opioid epidemic in the U.S. Seizures and confiscations of illicitly manufactured fentanyl increased 7-fold in 2 years between 2012-2014—highlighting the concerning prevalence of the drug.

When used illegally without medical supervision, a Fentanyl overdose is highly likely—and may lead to life-threatening symptoms such as slow or no breathing. The risks are further amplified when it’s mixed with other substances. 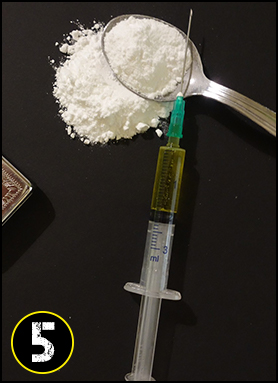 Despite being classified as a Schedule I (high potential for abuse with no medical use), Heroin is a relatively common opioid that’s illegally sold in the form of a white/brown powder or black tar. The drug is known for its highly addictive nature and rapidly acting properties—producing a surge of euphoria when snorted, smoked, or injected.

From a little under 2,000 heroin-related deaths in 1999, the number of fatal heroin overdoses rose to over 15,000 by 2016. Its status as one of the most dangerous drugs is further amplified by its ease of addiction.

Oxycodone is a Schedule II analgesic that goes by several street names—including Oxy, Perc, Ox, Kicker, or Hillbilly Heroin. It’s mainly abused intravenously or orally by the users of narcotics due to its effects of relaxation and euphoria.

Figures by the CDC show that the rate of fatal drug overdoses involving oxycodone and other semi-synthetic opioids increased from 1.0 in 1999 to 4.4 in 2016. The risk of death due to an oxycodone overdose increases significantly when it’s taken with other substances of abuse like alcohol. Did you know that cocaine (the now Schedule II controlled substance) was once easily accessible in the US—and even used as an ingredient in early versions of the Coca-Cola soft drink? Crack, coke, blow, flake, or whatever other street names it goes by is an intense stimulant that’s widely popular in America’s history.

As a testament to its status as one of the worst drugs, overdose deaths related to cocaine jumped to 11,316 in 2016 from less than 6,000 in 2014. This spike in fatal overdoses is partly attributed to an increased combination with fentanyl and increased availability/supply of cocaine from Colombia.

According to an article published in the Archives of Iranian Medicine, the properties of opium have been the subject of therapeutic interest since 3500 B.C. In 1803, scientists isolated morphine from opium with the intention of leveraging its pain-relieving qualities. The caveat to this otherwise ideal drug was that it causes dependence, among other side effects.

With 1 in every 4 patients who use Morphine and other pain-management opioids for the long-term developing an opioid use disorder, the drug easily ranks as one of the worst drugs. And while it’s still prescribed by licensed and qualified doctors today for chronic pain, the CDC lays out strict guidelines to minimize the risks.

The long-term side effects of morphine use include sexual dysfunction, immune problems, increased blood sugar, weight loss, poor appetite, chronic constipation, and some nasty withdrawal symptoms. This is why it’s usually used as a drug of last resort by a highly qualified medical practitioner.

Benzodiazepines (aka. benzos) are central nervous system (CNS) depressants that are prescribed for the treatment of alcohol withdrawal symptoms, muscle spasms, panic attacks, and anxiety. Common drugs in the category include Valium, Klonopin, and Xanax.

People who abuse benzodiazepines are at a high risk of side effects such as slowed heartbeat, body weakness, difficulty breathing, shakiness, convulsions, drowsiness, slurred speech, or coma. Keep in mind that benzodiazepines cause severe side effects and excessive sedation when combined with tranquilizers, narcotics, alcohol, and other drugs that slow down the brain’s function.

According to a study published in The New England Journal of Medicine, there are “dangerous trends in benzodiazepine overuse, misuse, and addiction.” The researchers note that the number of benzodiazepine prescriptions and the quantity of each prescription increased dramatically between 1999 and 2013. This coincided with an increase in overdose deaths related to the depressants—drawing attention to their overlooked risks as one of the worst drugs.

It’s typically used to reduce fever and treat mild to moderate pain in conditions such as flu, colds, toothaches, arthritis, muscle aches, and headaches. While it’s relatively safe when taken as directed, an overdose can increase the risk of liver damage—earning the prescription drug ingredient a spot as one of the most dangerous drugs.

A 2005 study appearing in the Journal of Pharmacoepidemiology and Drug Safety estimates that there are 26,000 case of hospitalizations and 56,000 emergency room visits due to overdoses related to acetaminophens.

Treatment for Alcohol and Drug Dependency

This is list is merely a tip of the iceberg. There are countless more highly dangerous drugs with a risk of severe side effects and fatal overdoses. If you know anyone who is struggling with drug and alcohol addiction, the best cause of action is to seek professional treatment before it’s too late.

PrevPreviousJobs for People with Anxiety (Low Stress Jobs)
NextWhat are the Long Term Side Effects of Drugs and Addiction?Next